It is a really good news to all of the Arsenal fans that Mesut Ozil become one of the team of the week card members, which means Mesut Ozil comes back from a long sick leave, caused by a knee ligament injury. It seems like that he is going to get back to his brilliant self, just wait and see!

The £42.5 million signing from Real Madrid was supreme in Arsenal’s 5-0 thrashing of Aston Villa on Sunday. A brilliant outside of the foot flick from him put Olivier Giroud in on goal for Arsenal’s first. The Frenchman then returned the favour by sliding a through-ball into Ozil’s path and he completed the move by deftly finishing across Brad Guzan.

As a result of this performance, EA have awarded the 26-year-old an 87-rated left-winger card, which is an upgrade of one and a position change from counter-attacking midfielder.

Kevin de Bruyne once again showed Chelsea what they let go as he produced a stunning display against Bayern Munich to receive his second inform card of the season. The Belgian ex-Blues man assisted one and scored two in Wolfsburg’s surprise 4-1 thumping of the German champions. For his exploits de Bruyne has been boosted to 83-rated counter-attacking midfielder. 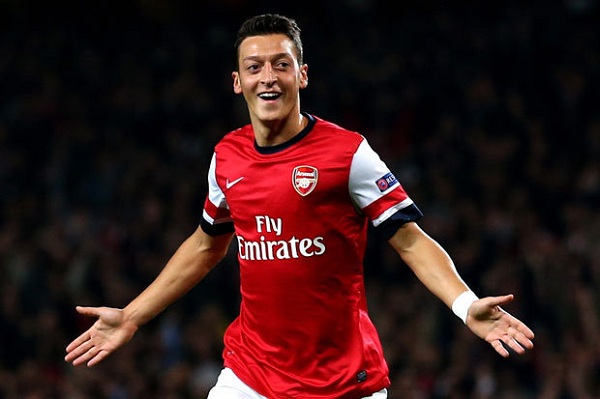 Other Premier League first-11 players include Swansea City defender Ashley Williams, who gets an 80-rated centre-back card for his brilliant performance in their shock 1-0 win away at Southampton. Newcastle United’s Remy Cabella is the other man to feature with an 80-rated right-midfield card. The French winger opened the scoring and dazzled Toon Army fans in their club’s 3-0 win away at Hull City on Saturday.

Another notable inclusion is Real Madrid’s Karim Benzema, who stepped up in place of the suspended Cristiano Ronaldo to score two in their 4-1 win over Real Sociedad. The striker has been awarded what looks like a frighteningly good 87-rated card.

See below for the full FIFA Ultimate Team team of the week first 11 and their ratings.