There is a celebration for 100 days until the FIFA Women’s World Cup Canada 2015, which sweep across the whole Canada from coast to coast, with the premier football event set to kick off this 6 June at the same time.

To mark the milestone, host cities across Canada organised special events to showcase what will be a once-in-a-lifetime experience for Canada, the 23 visiting nations, and a worldwide sporting audience. The 26 February events also coincided with the official on-sale date for individual tickets (as of 12.00 ET / 09.00 PT).

Tickets to the FIFA Women’s World Cup Canada 2015™ are available at UTfifa15coins.com/Canada2015, with prices starting as low as just $20.15. 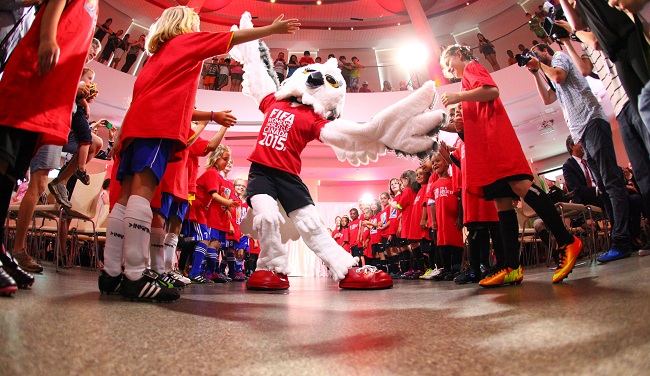 In Vancouver, the countdown started at the Vancouver International Airport with Canada Soccer and National Organising Committee president Victor Montagliani attending the celebration. Mascot Shuéme was on hand along with the To A Greater Goal™ Countdown Clock and a group of Japanese Taiko drummers. After the morning event, Shuéme then went “on tour” via the local transit system on the “Canada Line.”

In both Edmonton and Montréal – where Canada will play its group matches in June – events were marked at City Hall. A similar meeting took place in Ottawa, with the local venue team meeting the Mayor and Councillors at City Hall.

In Winnipeg, the event took place at Winnipeg Square with an interactive game of ‘pool ball’ for the on-site public. In Moncton, Shuéme made a special visit to local school, École L’Odyssée.

To a Greater Goal™ scarf campaign

The promotion encourages fans to reflect on their own “greater goal,” be it for football, family, friends or society.

Canada glows red to mark 100 days To a Greater Goal™

As a bookmark to the day’s celebration, all six venues showcased a local building lit up in red, which is both an iconic Canadian colour as well as the predominant colour featured in FIFA Women’s World Cup Canada 2015™ Emblem and Official Look.

In Vancouver, it was both BC Place and the Vancouver International Airport Control Tower that were lit red; in Edmonton, it was both City Hall and the High Level Bridge. In Montréal, it was the roof of Olympic Stadium that glowed in red.

In Winnipeg, Ottawa and Moncton, meanwhile, it was different city structures including City Hall that were lit in red, which looks really happy.